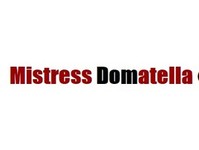 Your fantasy is my specialty!

In the early 1980's I went to my first fetish club in London. I was hooked and started to go to the underground clubs like Der Putsch, Skin Two and Madam Venus. I was involved with the creation, set up and running of Club Submission, the ultimate London fetish club of the nineties.

As an experienced medical Mistress I run a clean and fully equipped London medical room.

To browse this category you must accept the following terms: